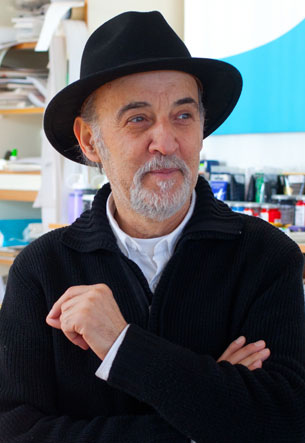 He was awarded for his graphic work MEDITERRANEO in London and Stockholm and for “Portrait of TIn Ujevic” from POETS series in London in 2005.

In 2005, WORLD OF ART BOOKS published his work in the monograph MASTERS OF TODAY / 100 CONTEMPORARY ARTISTS / THE BEST ARTISTS IN OUR TIME.

In 2006 WORLD OF ART magazine published his work in the monograph FAMOUS 100 CONTEMPORARY ARTISTS printed in 50.000 copies in London and distributed in book shops in Europe, the USA, and Australia.

In 2003, in Split, Pavo Majic became the founder and director of the International Graphic Biennial SPLITGRAPHIC. This year SPLITGRAPHIC is listed as one of the essential art events along with La Biennale di Venezia, Biennale of Sidney, Documenta Kassel, Biennale de Paris…

Pavo Majić’s exhibition “HOMAGE TO TIN UJEVIC” in WERKSTATT DER KULTURE in Berlin from 4th December to 29th January 2006, included portraits of 26 poets and was chosen by the press as the most successful exhibition only after Picasso’s retrospective in the National Gallery in Berlin.

So far, he has published three books: DO NOT FEAR! YOU’RE NOT ALONE! – Homage to Tin Ujević with Marina Majić Petit (2006); THE ANATOMY OF BREATH poem published in a limited edition as THE BOOK OF ARTISTS (2016); “THE ROLLING ORANGES,” travel and autobiographical records (2018). All the books are published in Croatian and English.

For many years, he was a participant in the manifestation Memories of Tin. Together with Arsen Dedić, Goran Matović, Tonko Maroević, and others, the manifestation marked and promoted the Poetry and Charisma of the greatest Croatian Bard of the written word. Thus, in 2007, he stayed in New York, where he had the exhibition of portraits from the graphic map dedicated to Tin Ujević at the Bowery Poetry Club. That same night, a poetry evening transpired; people read Tin’s poetry, as well as Marina Majić Petit’s essay on his exciting and turbulent life. She, too, attended this tremendous and above all exciting event. On that occasion, Anne Waldman, Patti Smith, and Sam Shepard had the first encounter with Tin’s poetry, which they all rated as excellent.

Many of his graphic sheets are in numerous Annals, Biennials, and Triennials’ collections around the world, where they have been exhibited.

He lives, works, and walks by the sea in Split.

It is not surprising that in his pursuit of the primality of the sign and the lapidarity of form, the graphic artist Pavo Majic had recourse to the Mediterranean, on whose shores he grew up, and that he turned for help to the poets, with whom he could approach the primordial meanings. The choice of motifs in his both series indicates the premises of the artist’s life and experiences, yet the actual mode of the execution of the works witnesses a specific visual art culture which is not sentimentally conditioned. Namely, neither did the Mediterranean light influence the morphology or syntax on Majic’s sheets, nor are the texts or picturesqueness of the expressions used by specific poets incorporated directly in the final execution of the prints devoted to them. A certain media detachment and the awareness of the need for a resolute transposition of the visual model are envisaged beforehand as the prerequisites for a strict creative procedure.

The Mediterranean symbolics and purity still determine the relations of principal rhythms, while in the combinatorics of elements we can possibly also detect some of the Pythagorean or Euclidean (and therefore Mediterranean) evocations. The organic spirals of the nautilus shell or the playful parallelisms of the blue stripes of “the sailor’s T-shirt” create a dynamic balance of a structural nature. The frame with the “word” quartet (ranging from the Mondrianesque to LeWittesque composition patterns) is an explicit eulogy to the sea as a strong foundation around which (the otherwise abstract) meanings of love, beholding and fantasizing congregate. Though indirect, the maritime inspiration is welcome and efficient.

The Poets’ Cycle is clustered around the protean role of the Croatian bard Tin Ujevic , the author who absolutely synthesizes the epochs, creating a paradoxical unanimity of polyphony. Majic used the images of the great literary figures as frames of the universal panopticon, with Worholesque neutrality (and even coldness) being reduced by the biased and affective function of the interventions in the text and proportions. In the vivacious dialogue between the colours and the uniform planes (with accents of iconic nature), an interesting correlation has been achieved between the poetic radiance and meanings.