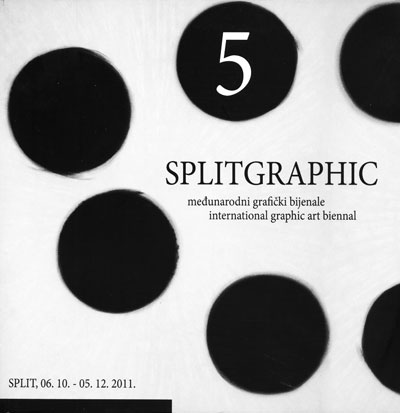 Splitgraphic Biennale is an international art event founded, organised and held since 2003 in Split.

From its beginnings Splitgraphic has been presenting renowned graphic artists through exhibitions, lectures and workshops, and it has been supporting and promoting contemporary tendencies in printmaking, both contemporary and classic graphic techniques. In addition to eight group juried exhibitions, Splitgraphic also organised a significant number of solo exhibitions by Croatian and international graphic artists and printmakers.

From the very beginning of Splitgraphic’s activities, Marina Majić Petit has been collaborating on all biennial exhibitions, and since 2007 she has been actively working as curator and coordinator. She graduated in art history and English language. After a student internship in the Peggy Guggenheim Collection, and participation in the work of the Venice Biennale, upon her return to Split she started working on organizing and leading the Splitgraphic’s program. She also works on juries, writing forewords and essays for Splitgraphic catalogues, and for group and solo exhibitions of graphic artists from Croatia and abroad. International Graphic Biennial Splitgraphic, was launched by Pavo Majić in his gallery Studio Naranča.  Pavo Majić is a graphic artist himself. He has exhibited his graphic art at numerous international biennial exhibitions, as well as at the world’s oldest and most prestigious International Graphic Biennial in Ljubljana (Slovenia) in 1995. The president of the jury and curator of the biennial that year was Pierre Restany, a world-renowned authority in the field of fine and graphic arts. This partly influenced the decision to launch a graphic event in Split. Although the first and decisive reason for starting the biennial was that Split has a long and interesting history of graphic art. Here we primarily mean the graphic map of Robert Adam, a British royal architect, who with his collaborators printed an excellent and valuable graphic map of Diocletian’s Palace in Split, which was a European bestseller in the 18th century.